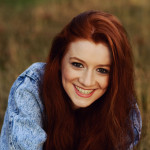 We were really privileged to conduct this week’s past pupil profile with Ciara Baxendale, one of the first Little Voices pupils from 2007 and now one of the youngest students studying at RADA. She offers advice and words of inspiration for up and coming actors/singers at Little Voices.

Where are you now? (eg. college/uni/career and location in the world)

I am currently living and working in London, having completed the foundation course in Acting at RADA in March 2014.

What are your aspirations for the future?

When did you first join Little Voices?

I joined Little Voices when it first began as one of the first ever pupils in 2007 How did you/your parents hear about Little Voices?

I heard about Little Voices from my school, Westholme, where I had singing lessons and my teacher recommended that I try one of the classes.

What made you attend and stay with Little Voices?

I loved the lessons and formed a close-knit bond with the members of my group. I was always encouraged by the teachers, which boosted my confidence and encouraged me to stretch myself in performance.

How do you think Little Voices has helped you – is there a direct correlation between what you are doing now and your attendance at Little Voices?

I definitely think Little Voices helped me by giving me confidence, especially singing in front of others. I have had several auditions where I have had to sing and I would have been a lot more nervous without my training from Little Voices, which encouraged me to sing front of others, and to perform the song, not to just sing it!

What did you love about your lessons?

My favourite thing about lessons was preparing for exams. I know it sounds odd but I actually really enjoyed taking LAMDA exams and reading the examiners comments so I would know what to improve on next time around, and I loved getting to learn lots of different songs from all the musicals and having the chance to play lots of different roles!

Can you give a one line quote/advice for those wishing to follow in your footsteps?  (what they should absolutely do to reach their dreams?)

If you truly want to reach your goal, you will achieve it. Success comes from belief in yourself, don’t listen to anyone who says that you can’t do it.