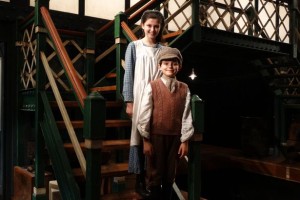 Little Voices Fulham student Max Moorehouse has landed his first role, as part of four teams of youngsters who will alternate in the show ‘The Railway Children’, playing several parts in the children’s ensemble and performing with comedian and actor Sean Hughes as Mr Perks and actress Caroline Harker as Mother.

Max began training with the performing arts organisation in Fulham at aged 5 years in 2010. According to Little Voices’ Principal Ashlea: “It is no surprise Max has secured this amazing role as has a huge talent and we are so proud of him,” she said. “At Little Voices we pride ourselves in providing outstanding tuition, expert guidance, support and traditional methods of teaching drama and singing, and Max’s natural talent flourished here. So much so that there is now no stopping him!”

The Railway Children opened at the King’s Cross Theatre to the public in January this year. The production is in support of the Railway Children Charity that aims to help homeless and runaway children throughout the world, with £1 per ticket donated to the charity.