Marking the end of a highly successful academic year during the week of the 6th July, all the students, aged between 4 – 15 years from Little Voices Richmond performing arts training school, put on a spectacular performance to family and friends at there end of year performances. The halls were filled with parents, friends and family who came along to see this well-known school’s talented students in action.

Principal of Little Voices, Ashlea Pearson commented: “For several weeks everyone at Little Voices have been working hard towards there LAMDA examination pieces which they did in May. I wanted to give our pupils and parents this fabulous opportunity, allowing parents, friends and family the chance to see what we have been up to in our lessons and to witness there child’s exam pieces.

Over 40 pupils from Little Voices Richmond took to the stage on Tuesday 7th July performing scenes and songs from award winning musicals such as; Mamma Mia, Matilda and Bugsy Malone. Not only did the older pupils perform there scenes but the ‘Mini Voices’ aged 4 – 7 years also took to the stage to perform there solo pieces reciting there LAMDA solo introductory poems.

Quote from Little Voices principal, Ashlea: “Everyone were flawless and appeared totally confident. It was fantastic! A huge thank you to our wonderful Little Voices team and pupils.” 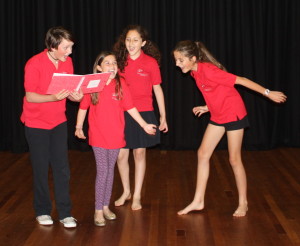